System design 4 - How to design a rate limiter

In computer network, rate limiting is used to limit the rate of the requests. Rate limiter is widely used in production to protect underlying services and resources by limiting the number of client requests allowed to be sent over a specified period.

Why rate limiting is used

In a system design interview, it’s very important to ask questions and clarify the requirements and constraints with the interviewer. Here are a few examples:

In this article, we are going to assume the requirements of a rate limiter are:

The reason not to implement on client side is that it’s easy to bypass or be forged. Moreover, we might not be able to force using a uniform client.

Besides the client and server-side implementations, there is an alternative way., we create a rate limiter at the middleware layer, which is more intuitive since API gateway become widely popular in a microservice architecture.

Although maintaining a rate can be as simple as counting an occurrence, there are several different algorithms to do it.

In conclusion, both algorithms have pros and cons. The bucket algorithms are simple and easy to implement. However, the downside of the token bucket algorithm and leaky bucket algorithm is that both of them have 2 parameters and it’s not easy to tune the parameters properly. As for the fixed window algorithm, it allows spikes at the edges of a window, which might cause more requests than the allowed quota to go through. However, sliding windows have the benefits of a fixed window, but the rolling window of time smooths outbursts. [2]

In the following section, we are going to design the architecture of the rate limiter use the sliding window log algorithm.

We have discussed the algorithms, now move to high-level design. We are going to store the data in the database, a in-memory storage is likely a good choice because the rate limiter should respond as quickly as possible. Redis is the best option here because it is fast, has a simple API to manipulate the data and supports a time-based expiration strategy.

Rules setting and response after being throttled

To support a flexible setting, the rate limiter loads the rules configuration when it starts or has a mechanism to allow uses to update the rules. Here we introduce a config database to persist the configuration. 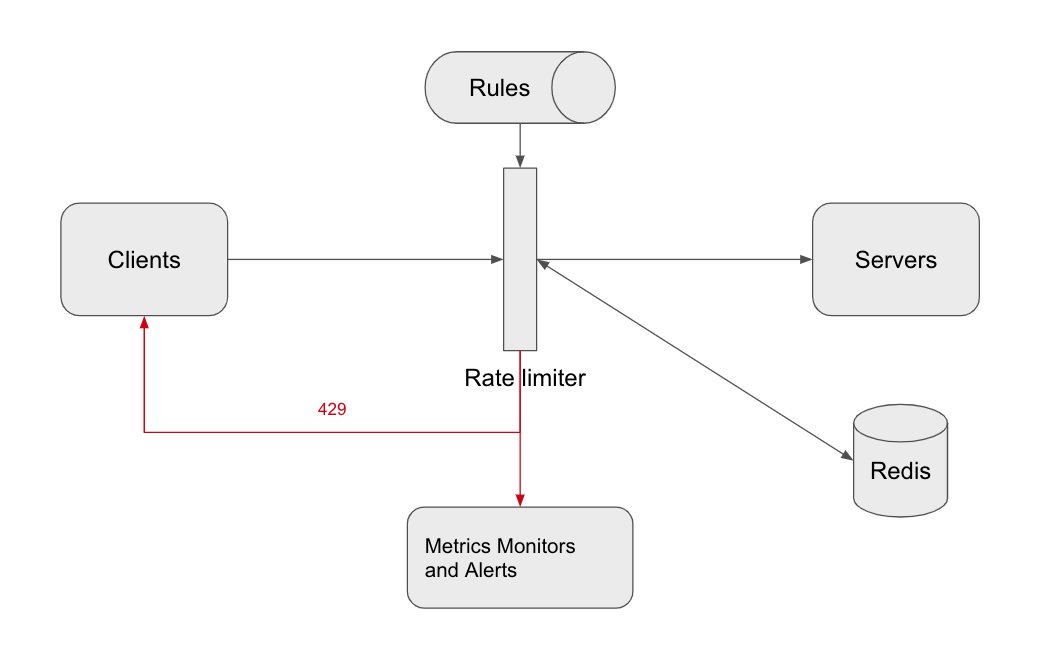 Race condition might occur in a highly concurrent environment with the sliding window log algorithm because it needs to remove, add and count the timestamps. The data becomes stale while multi threads/instances are processing at the same time. However, we can take advantage of the MULTI command. In this mode, all Redis operations can be performed as an atomic action. This means that if two processes both try to perform an action for the same user, there’s no way for them to not have the latest information, which prevents the race condition. [4]

In this post, we discussed the requirements of a rate limiter and different algorithms of rate limiting and their pros/cons. We also proposed the architecture of our design, talked about the potential issues in practice and provided solutions to it.